It was my long-time wish to visit the valley of silence and when I visited the place I realised that it is the most beautiful place that I have ever been to...

Silent valley or Sairandri vanam is situated on the north-eastern part of Palakkad district on the Nilgiri hills, eighty kilometres from Palakkad. People from Chennai and Bangalore area can reach here via Coimbatore.

The real journey to silent valley starts from Mannarkad... From here, you will start to see the authentic beauty of nature. At the end of this road, the village disappears, and the road gives way to a narrow lane, with thick vegetation on either side. You have to travel around 10 km through narrow hairpin curves, which will lead to Mukkali.

The information centre is just one kilometre away from Mukkali junction. You have to get permit from Kerala State forest dept. and book the visit in advance. The entry pass will be given from this information office. You have to hire a jeep from here. This is the only transport, which is able to take you through the muddy and rutted road to the core of the jungle. You can spend five hours there till 5pm, and the jeep will take you back to the information office.

Local people call this forest as Sairandri vanam. Sairandri is the other name of Panchali, wife of the Pandavas. Legends say that Pandavas lived a few days here during their thirteen years of anonymity or ajnjathavasa and thus the forest got the name Sairandri vanam.

The forest was conspicuous by the apparent absence of the noisy insects Cicadas. So the forest used to be very silent and this may be the reason that it got the name silent valley. Another opinion is that the forest got the name from Macaca silenus, another name for lion tailed macaque, which is found in plenty in the forest.

The road was very muddy, and journey was not that easy. On either side of the road I saw the houses of tribal people who are involved in coffee plantation with government aid. On the way to the core zone I saw a rat snake. I thought of taking a snap, but it disappeared quickly.

On the way, the guide showed me a small stream. He told me that the water is very pure and is drinkable. We filled our bottle and again started the journey.

Sairandhri..This is the actual entrance to the forest and the core zone of the Silent valley National park starts from here. When you enter the place, you can feel the soul of the jungle. Here you will see a watchtower. I climbed around 200 steps to reach the top of the tower. It gives a panoramic view of the forest… view of river Kunthi, beautiful valleys and deep mist-covered mountains. Silent valley forest is divided into four regions. Sairandri, poochippara, nelikkal and valakkadu. One can see all these regions from here. This is the flowering season of a particular tree, which is locally called as churuli and it makes the entire forest a never-ending carpet of white flowers.

Near the watchtower you can see the inaugural stone of the park erected by former Prime Minister Rajeev Gandhi.

From there, I accompanied my guide towards Kunthi River. It is around two kilometres away from the watchtower. On the way to the river I could spot nilgiri langurs. They have glossy black, thick long hair on the body and yellowish or brown hair on the head. They usually eat tender leaves, fruits, tree barks, flowers etc. They were not ready to pose for my camera, as they were very busy with jumping from one branch to another. Sometimes the cicada sound was besieged by the sound of the monkeys.

But the most beautiful animal that I have seen here is the malabar giant squirrel. It is also known as Indian giant squirrel. They are very common in rain forests. One of the most colourful species of squirrels, its long and beautiful tail is its unique characteristic.

Leeches are very common here. These blood-sucking creatures can find your presence by smell and even by sound vibrations. Leech bites do not hurt, but the wounds do bleed extremely. To avoid it, you can apply salt or pan masala on you skin. My guide was smart enough to lead me through certain secret paths where leeches are not found.

The great Indian hornbill, hairy winged bat, fishing cat, leopard, tiger etc. are some of the very common species found in the forest. This area is very special for lion tailed macaque. This is the biggest adobe of this particular monkey species.

More than hundred species of butterflies are here. Amazing number of moths is also found here.

On the way to river kunthi, my guide showed me two holes on the mud wall. He said that an elephant dug the holes. On either side of this road you can see bamboo trees, which are the favourite food of elephants.

All over the valley you will see a particular type of fruit, which looks like a miniature jackfruit. This is culleniia exarillata, which is locally known as vedi plavu. This is the favourite fruit of lion tailed macaque. They eat the fruit, leaf, trunk and even the root of the tree.

Finally we reached the river… You will realise the intact beauty of the silent valley from this river. This is one of the most beautiful and clean rivers in the world. This Mystical River has got a mythological background. During the anjathavasa, pandavas halted in cave on this hill, and the river was called after their mother Kunthi. The cool breeze, music of the river, exciting noise of the jungle, misty valleys and the thick vegetations gives a meditation mood. Here is a hanging bridge over the river. I watched the real beauty of the river from this bridge. It is untouched by human and this Virgin River runs around 20 kilometres like this.

It is time for me to go back… My jeep is still waiting there but I didn’t feel like going back from the lap of Mother Nature. This journey guarantees an insider’s view of the beauty, not an outsider’s hallucination. I can promise you one thing; once you have visited the place, even if you are far away from here you will feel the smell and care of the nature..and I would like to conclude this journey with a famous saying, “ in the woods we return to reason and faith.” 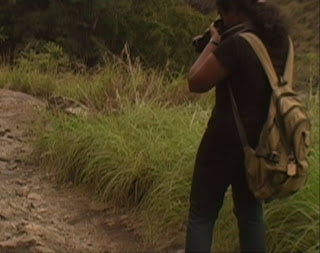 Sheikh Fariduddin was a great Sufi saint, who did a lot for the intensification of Islam. It is believed that he is a descendent of Hasrath Umarul Farooq and the son of Jamaluddin Sulaiman and Kharsam khathoon. He travelled far and wide for acquiring and spreading knowledge that he has acquired. He visited almost all the places of India for spreading Islam, and on one of his sojourns he reached Kanjiramattom, a small village in Kerala…

It is believed that once, this place was a jungle and was rich with snake wood tree. Snake wood tree is locally known as kanjiram and eventually the place got the name Kanjiramattom.

The saint spent a great part of his life to abet the poor and uneducated people of this region. Gradually he was able to build a mosque here to satisfy the spiritual needs of the local Muslims.. Today this mosque is known as Kanjiramattom mosque and is dedicated to Sheikh Fariduddin…

The mosque, located 25km away from Cochin is famous for the Chandanakkudam festival celebrated here in January 13 and 14 every year. Thousands of people come to partake in the festival also known as Kodikuthu festival, and to visit the tomb of the saint each year.

During the days of the saint, the place was in the clutches of poverty. So the saint used to make rice porridge with jaggery and coconut, and serve it to the local people himself. He never showed any religious discrimination and considered every one as the children of God. The local people used to address him as uppuppa, which means grandfather.

In memory of this deed, people today offer nercha kanji or chakkara kanji to the saint. On the day of the Chandanakkudam festival, people from all walks of life without any religious barrier gather here to offer chakkara kanji to their dearest uppuppa.
A ritual called Kodikuthu is the main attraction of the festival... During those days the Muslims of this area used to accompany Hindu pilgrims to Sabarimala on the Makara samkranthi day. The local people say that their poverty tempted them to do this.

Sheikh Fariduddin found that this is a non-Islamic custom.  So on a makara samkranthi day, he gathered the local Muslims to the mosque by playing Kombu, a kind of trumpet. He tied a flag on a tree of the main mosque or the thazhe palli courtyard and then another one on the mele palli. He asked them to follow the custom every year and thus he managed to prevent them from following the non-Islamic tradition, at the same time maintaining the religious tolerance of the place. Devotees still follow this ritual as a tradition. Every year, on this particular day they tie a flag on a tree at the tazhepalli. Then as a procession they move to the mele palli to tie another flag.

Nercha kodiyeduppu is another interesting tradition of the mosque. This offering to the God is similar to the parayeduppu ritual of Hindus. Devotees have to book early to make this offering. On the festival day, caparisoned elephants from the mosque visit the houses of the devotees and receive offerings and a flag from each house.

‘Chandanakkudam’ the ritual after which the festival is named takes place at night. Devotees carry pots filled with sandalwood paste, from the thaze palli to the mele palli. A huge crowd accompanies it as a procession. Decked up Elephants, folk art forms, percussion instrument ensemble follows this procession.

Performance of Traditional Muslim art forms like daff mutt, kolkali etc. add to the attraction of the procession. The festival comes to a close when the procession comes back after presenting the pots at the mele palli…

Kanjiramattom mosque is the best example for religious tolerance and communal harmony. It is a wonder in this age of all round chaos and disharmony.
Anyone can visit the mosque without religious or gender bias. Many customs of the mosque are similar to that of Hindu customs. Traditions like caparisoned elephants; percussion instruments ensembles etc. are closely connected with temple culture.

Breaking of coconut in front of the Vavaru swami is another interesting custom of the mosque, which has its roots in Hinduism.

May be all these customs are the desires of the great visionary, Sheikh Fariduddin, to maintain the harmony of our land and to show the real meaning of the saying ‘Unity in diversity’… Lets hope and pray it stays intact through the ages…

Vineetha Venugopal
Chennai, Tamil Nadu, India
About me?what should i say???everything said will be a projection, to create an impression.....even this blog.....i don't know who i am!!! that is the only enquiry.....and that's why the name Anaamika, the nameless.....

Proud to be an IndiBlogger